• DURING THE MEETING WITH THE FOREIGN MINISTER, HE EXPRESSED APPRECIATION ABOUT THE GROWING FRIENDSHIP BETWEEN THE TWO COUNTRIES.

Ghana has pledged its full support for the ‘One Country’ ‘two Systems’ of China amid the uprising in Hong Kong.

Foreign and Regional Integration Minister, Shirley Ayorkor Botchwey, in a meeting with Chinese Ambassador to Ghana, Shi Ting Wang, on Tuesday, October 15, 2019, said the support to China is a sign of Ghana’s adherence of the United Nations’ policy of non-intereference in the domestic affairs of another country.

In that regard, the Minister seized the opportunity to wish the people of China well.

She expressed the hope that China will find amicable solution to the Hong Kong violence.

THE SUNDAY, AUGUST 25, 2019, RALLY WAS TO HELP MEMBERS OF THE COMMUNITY REGISTER THEIR DISPLEASURE OVER HAPPENINGS IN HONG KONG, AND TO CALL FOR AN END TO THE VIOLENCE. MEMBERS OF THE CHINESE COMMUNITY INCLUDED CHINESE TRADERS, DIPLOMATIC AND SERVICEMEN AND WOMEN.

Ghana’s support comes as China’s President Xi Jinping warned that China would not tolerate any foreign interference in the Hong Kong Crisis.

Recently, it would be recalled, members of the Community in Ghana rallied at the Sentuo Ceramic factory in Tema.

The Sunday, August 25, 2019, rally was to help members of the Community register their displeasure over happenings in Hong Kong, and to call for an end to the violence.

Members of the Chinese Community included Chinese traders, diplomatic and servicemen and women.

The rally was organized by the Council for the Peaceful Reunification of China In Ghana together with the representatives from all the Chinese associations, Chinese enterprises and business community in Ghana.

They voiced out “no secession, no violence” in Hong Kong, faulting the Western Media including the BBC and CNN for misleading the world on happenings in Hong Kong.

Ambassador Ting Wang, at the time told Ghanaian journalists that BBC and CNN, among others have been reporting selectively, urging that the protest should stop.

According to him, “the Western Media is misleading people in the world.”

He said Chinese will not allow anyone to challenge “One Country Two Systems.”

He urged that “the foreign forces must stop interfering in Hong Kong’s affairs.”

He alleged that “evidence shows that the situation in Hong Kong would not have deteriorated so much had it not been for the interference and incitement of foreign forces.”

He warned “I want to reiterate here that Hong Kong is part of China; no foreign country should interfere in Hong Kong affairs.” 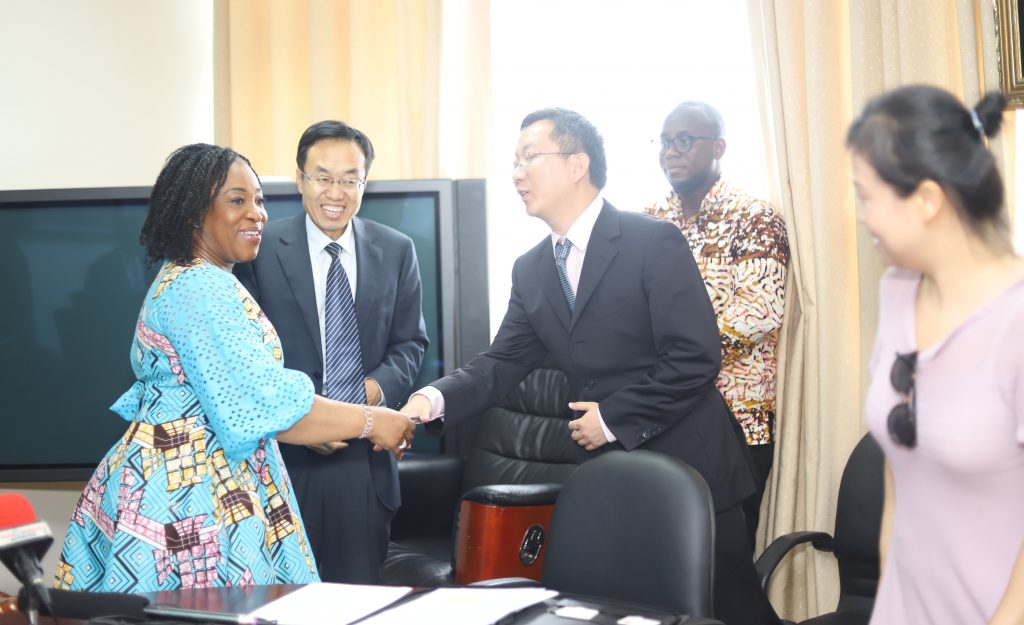 “Hong Kong is an inalienable part of China since history,” he said.

For the past two months, violent demonstrations and riots in the Hong Kong Special Administrative Region (HKSAR) of the People’s Republic of China have attracted global attention.

“This is precisely the objective of today’s gathering which is organized by the Council for the Peaceful Reunification of China In Ghana together with the representatives from all the Chinese associations, Chinese enterprises and business community in Ghana to voice out our support and concern,” he said.

He disclosed that unremitting efforts have been made by the Chinese Central Government and the HKSAR Government.

At the same time, according to him, some international media and people were disregarding the facts or making what is called “Selective Blindness” and spreading irresponsible remarks.

The Ambassador lamented that “they are also preventing the international community to understand objectively Hong Kong’s violent and illegal activities.”

The problem in Hong Kong started with the HK SAR Government intention to revise the Fugitive Offenders Ordinance (Extradition Bill) between China, Macau and Taiwan, and later announced that the revision will be stop but the violence did not stop.

Instead, he revealed, the extremist militants attacked the Hong Kong Legislative Council and intensified their efforts to publicly deface the national emblem, insult the national flag, and arson attacks to Hong Kong police.

He added that they even attacked the Liaison Office of the Central People’s Government in Hong Kong and the Hong Kong Police station, blocked Hong Kong subway, airport and public transportation.

“These are far beyond the scope of freedom of assembly and demonstration,” according to him.

“Even the signs of terrorism have seriously arisen,” he said.

“This has not only affected the normal life of the Hong Kong people, but also has openly challenged the bottom line of the “one country, two systems” principle and the authority of the central government.”

” Which sovereign country and responsible government in the world can impassively watch this and do nothing? he quizzed.

He clarified that in the current chaos in Hong Kong, a small number of violent radicals were at the front with some kindhearted citizens misguided and coerced in the middle, but the masterminds behind the scenes are the anti-China forces in and out of Hong Kong which have been trying to mess up Hong Kong.

” They are openly funding and supporting the radical activists, helping them to build strategies. Some of them even personally coordinated the subversive destruction movement of the riots,” he added.

He argued that there was nothing wrong for the Hong Kong Government to propose the amendment to the Ordinance.

The British invaded China and occupied Hong Kong about 170 years. Hong Kong became a colony since then.

Hong Kong’s return back to motherland 22 years ago, the Chinese government has effectively implemented the policy of “one country, two systems”, “Hong Kong people governing Hong Kong” and has granted a high degree of autonomy to Hong Kong, in accordance with the Constitution of the People’s Republic of China and the Hong Kong Basic Law.

He noted that Hong Kong has maintained prosperous and stable all through these years and has even been recognized as the freest economy in the world.

During the meeting with the Foreign Minister, he expressed appreciation about the growing friendship between the two countries.